Twelve years after he was first nominated for the Most Valuable Player (MVP), Isaac Afidra finally won the most prestigious award in local basketball.

Afidra beat two-time winner and DMark Power teammate Ben Komakech to the 2011 MTN-Fuba League playoffs MVP diadem during the annual dinner at Imperial Royale Hotel on Saturday night.
“I dedicate this to Tyler,” he said. “He has something new to play with.” Baby Tyler was born last month, just 48 hours after Afidra led Power to a first successful defence of the national title and fifth in total. 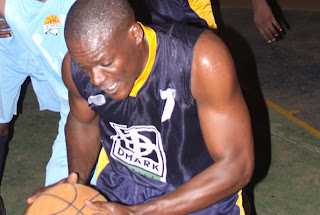 The two nominees walked together to pick the award. Afidra first joined Power in December 1999 and was first nominated for MVP in 2000 losing out to Wilbrod Oketcho (RIP).
Four years ago, he again lost out to Komakech and the same happened last year.
The go-ahead three-pointer to give Power a 97-96 lead in the decisive Game Seven must have helped to tilt the balance in his favour. It was from that moment that Warriors crumbled and Power gained the impetus to claim one of the most thrilling finals in the history of Ugandan basketball.


Double-doubles
The former KIU Titan star scored 29 points and 15 rebounds with Komakech putting the finishing touch to the 99-97 victory over Warriors for a series 4-3 win.
Through the series, the forward scored 66 points and 76 rebounds including four double-doubles in the final four games of the thrilling series. Komakech, a guard, had 121 points and 32 assists.
Despite previously not awarding foreigners with individual accolades, UCU Lady Canons’ Kenyan centre Purity Adhiambo took the women’s gong. She helped her side sweep KCC Leopards 4-0.
Warrior’s Eric Malinga was named regular season MVP ahead of Stephen Omony (Miracle Eagles) but Ivan Enabu, also a Warrior, was controversially not nominated at all.
KCC’s Martha Soigi took the women’s equivalent. Malinga and Soigi also clinched the respective top scorers’ awards. The emcee Carol Mugasha didn’t nail this as the announcement of Afidra before the other 31 honours killed the mood entirely. The entertainment hardly left any smiles.
# posted by afrbk : 15:45

Comments:
Magnificent beat ! I wish to apprentice while you amend
your site, how can i subscribe for a blog website? The account helped me a acceptable deal.
I had been a little bit acquainted of this your broadcast offered bright clear idea
Here is my web site ; cigarette smoking occurred

This is a really good tip especially to those new to the blogosphere.
Brief but very accurate information… Thank you for sharing this one.
A must read article!

Hi it's me, I am also visiting this website regularly, this site is really good and the people are genuinely sharing good thoughts.

Hi there Dear, are you actually visiting this website regularly,
if so afterward you will absolutely get nice know-how.

Hi, i believe that i saw you visited my site thus i came to return the choose?
.I am trying to to find issues to improve my website!
I assume its good enough to make use of some of your concepts!
!

Manziel has been photographed at parties often this offseason, with many of the photos making their way to social media or the gossip site TMZ. During the 2015 offseason, when he was still a quarterback with the Cleveland Browns, Manziel spent some time in a rehab facility. sports flags sale ,Chicago Bears flags,Cincinnati Bengals flags