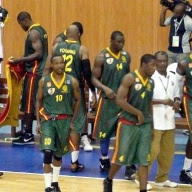 Head coach Stephen Obah revealed that his team will come together in Cameroon's capital city of Yaounde on 20 June and travel overseas to Serbia and China in the lead-up to the FIBA Africa Championship that will take place in Madagascar from 17 until 28 August.
Cameroon finished fourth in the African continental championship two years ago.
They have been drawn in Group C of the Preliminary Round and will take on Cote d'Ivoire - the runners-up in Libya in 2009 - Egypt and South Africa.
The winner of the FIBA Africa Championship will qualify directly for the 2012 Olympics in London with teams that finish second and third earning berths into the Olympic Qualifying Tournament.