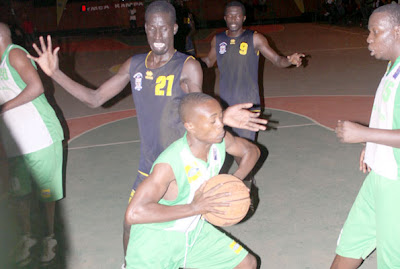 A less than impressive Friday night crowd at YMCA court was treated to a feast of MTN-Fuba League entertainment that will make those who stayed away envious.

That was a tasty starter for see-saw contest in which many sided with two-time champions Nkumba Marines and they didn’t disappoint by defeating Ndejje University Angels 68-59.
It was Marines’ first victory to end a two-game skid delivered by ironclad defence – nearly shutting out Ndejje in the paint.
“Even if our first two games were poor due to poor execution on the offensive end, our practice has focused on defence,” Timothy Odeke, the Marines coach, said.
Wilson Otweyo scored a game-high 13 points and eight rebounds as both teams struggled to create plays committing a combined 33 turnovers.
Marines kept their noses ahead taking the first and final periods 20-14 and 25-16 respectively to bury mid-game wobbles.
Ndejje coach Walker Obedi disappeared in thin air following his team’s first defeat. Cyrus Kiviri and Crispin Biko epitomized their poor night with a team-high 10 points apiece. Earlier, Suzan Amito (13) and Mercy Etyang (10) were only women to reach double but ended up on the losing side in a close game against the champions.