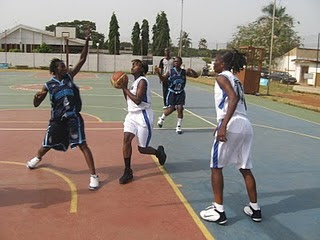 No Georgina, no Becky, but Police got Emmanuela. Police reiterated their dominance of CEPS ladies by winning this much anticipated re-match of the finals that never "ended". Police made their thoughts clear once again; "we are not loosing to CEPS"seems like the plan their coaches had in their playbook as they beat CEPS for the second straight season. CEPS came into the game with a clear plan, pass the ball more, get open and get higher percentage shots. They did a good job at it especially in the first quarter as they started the game with a 10-2 run which was reduced to 14-10 by the end of the 1st. Polce stayed with their everyday game, get the ball to their "bigs" (Rahi and Esi) and let them get to work while their guards kept the CEPS defense honest with their shooting from downtown. Enter Emmanuela, another French speaking acquisition of the Police women's team. She got game! Picture a 5'9'', 5'10'' southpaw chic with a man's game; decent defense, jab step to the right, then quick dribble through the CEPS defense for the lay up. But then CEPS wasn't an easy foe,led by Belinda Tawiah(undersized but did a wonderful job defending Police' "bigs") they fought and kept the game alive to the end even though they looked beat from half way through the second quarter. Can't wait for the rematch of this game later in the year...


D1... CEPS 70, Magic 50
Not as boring as I thought it would have been, after watching these two teams play in last year's Thome Cabalan preliminary stages. A "Brimah-less" but "Douggy-ful"(back from suspension after 10 months) CEPS team looked like they were running a clinic on how to get Dodzie open for the jumper as they set multiple picks for him to do the baseline cut and take the trey. With Magic coach, Wilson still serving his suspension, the Magic were left to survive the game on their own. This game saw Magic's starting front court play a lot of minutes and they proved their worth to the team. They worked hard on the boards but still need some tweaking to make them the team's bedrock.

Comments:
great work u doing here, bringing all of the continent's basketball news into one joint...bt u could as well pay homage to some of the sources... cos u cant be all over africa alone....still great work!