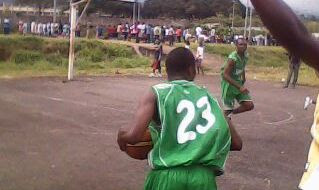 The South West regional League of basketball stated activities on Saturday 4/12/2010 in Buea with the Launching of its activities. The match Volcanic Warriors Buea Vs SONARA basketball Club ended 60 against 55 for Volcanic Warriors.Evolution Basketball Academy and Far compet all of Buea ended 28 against 37 for Far Compet Buea.

The first day of play

The city of Limbe hosted teams from Fako division for the first groupings on Sunday the 12/12/2010 at 2:pm. The teams included Zion Creekers from Tiko, Volcanic Warriors from Buea and the host SONARA BC Club.
In this Competition that saw the Limbe Team in the regional League for the first time over a long period was very thrilling.
Thou thoroughly beaten there is much hope with the team from Tiko which does not have a training ground for now.

Finally the match against to long rivals VOLCANIC WARRIORS of Buea VS SONARA Limbe was tight in the first two quarters then taken over by the boys from Buea to carry the day as the scores shown bellow.

The League's activities have been suspended till next year due to the National Games Scheduled For Ngoundere 2010 from the 14 to the 22 of December.

The next grouping shall be in Kumba in January 2011 with teams fron Ekondo Titi, Buea, Limbe, Tiko and Kumba featuring.

The South West Regional League is glad to have covered 4 of its six (6) divisions with the slogan "Taking Basketball to another dimension", including, Manyu(Mamfe Basketball Club), Meme (Vianello Kumba ), Ndian(Pamol Basketball Club) and Fako(Volcanic Warriors Buea, Far Compete Buea, Veterans Buea, Zion Creekers Tiko and SONARA Limbe). We hope before the end of 2012 all the region should be playing Basketball at all levels.

Long live the South West Regional League of Basketball.May the Good God bless all the members of this League, especially those who have taken the League to this Level.