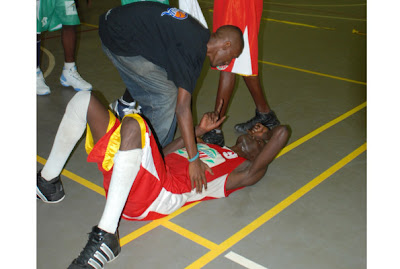 One half of the men’s and women’s MTN-Fuba League finals was completed on Friday night as DMark Power and UCU Lady Canons made huge statements about their title credentials.

Just like when they won their last titles in 2008, Power and UCU were in total demolition mode to rout Mountain Dew Falcons 86-68 and KIU Rangers 71-53 to take their respective best-of-five semifinal series 3-1.

The only difference between the two finalists was the weapons they required in returning to the final at the MTN-NCS Arena Lugogo with UCU virtually riding on Lorraine Akinyi whereas it was another dominant performance for Power to defeat Falcons for the fifth time in six games this season.

Power’s depth triumphed over a thin opponent. Isaac Afidra had 19 points and 11 rebounds to start the annihilation before Joseph Ikong (15), Richard Balemwa (12) and Emmanuel Enabu (10) ran riot in making 29 of 56 from the field in comparison to 15 from 39 for Falcons. “I got greedy because I was hungry for this win,” Afidra said. But perhaps the most telling stat was Power picking 47 rebounds as opposed to Falcons’ 37. “Rebounding has always been our main focus this year.

In the past, many teams scored against us on second chances,” the forward added. The six-time champions are known for rising in adversity but their story came to a forgettable end even after they led 20-15 in the first period before succumbing 22-15, 24-19 and 25-19 in the subsequent three.

No one can forget the absence of Bienvenue Ngandu and Mike Buzangu. The duo’s exit over unpaid wages prior to the play-offs left Falcons very thin on quality.

Hard as Richard Osano Omondi fought for his 22 points, nine rebounds and nine assists, definitive support only came in from Sudi Ulanga (17). Emmanuel Ateng’s (11) powerful slam following a drive into the Power defence in the fourth was good enough consolation with the entire crowd applauding him.

Earlier, Akinyi had 31 points and 14 rebounds to lift UCU beyond the hurdle that evaded them last year.

In today’s crunch game, UCU Canons must dig into their reserves to erase Wednesday’s morale-sapping 96-49 loss to Kyambogo Warriors. The latter lead the series 2-1. Similarly, KCC Leopards and A1 Challenge clash in the women’s division with the former leading ahead of game four.