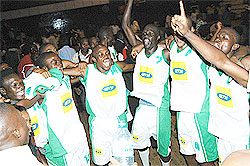 Teamwork is the key to victory in sports, it’s often argued. A team with good players who can’t put their act together usually achieves less success and this can explain why Greece beat USA in the semis of the FIBA World Championships, writes Daily Monitor’s Sande Bashaija.

The likes of Carmelo Anthony, Joe Johnson, Dwight Howard, Kirk Hinrich, LeBrone James and Dwayne Wade were outwitted by the lesser-fancied Michalis Kakiouzis, Lazaros Papadopoulos, Kostas Tsartsari, Nikos Zisis and company.Though it may sound ridiculous to draw a comparison between Uganda’s basketball and the rest of the world, there are many lessons that can be picked from the Greece-USA experience.

Uganda Christian University (UCU) Mukono joined the basketball league two years ago and the only game they have lost since then was on their debut to Spena Angels. They emerged the 2005 Second Division champions, earned promotion to the Yello Go Conference and did not register a loss this season. Like Greece, UCU coach Jason Mehl says; “I think we are the most hardworking team in the country. We run very hard in training and the teamwork is just immense.”

UCU beat Nkumba in the semis of the Utl sponsored university league and downed Makerere in the final and also claimed the East Africa University Games basketball championship.

Great year ruined
Having gone the season unbeaten Mehl says his team assembled at Lugogo Indoor Stadium hoping to scoop an award or at least recognition. Unfortunately all UCU could be given was a plaque. And without hesitation Mehl said; “My boys have rejected the plaque and I support their decision.

Look at the second best team (Knight Riders) in our conference; they have been voted most improved and decorated with medals.” “How can you give an MVP a t-shirt and Shs20,000. “A medal is something that a player will keep and cherish for some good years,” Mehl added.

A hurting experience it was but Mehl believes it will be a motivation for the 2007 season in the top flight. Which was a more improved team than UCU last season? I doubt if any.

Marines’ style
For the second year running Marines won the MTN Basketball League championship. Unlike in the past when Marines relied on the individual skills of Norman Blick, the 2006 season was different. The Entebbe-based side started the season without Blick, and outsmarted Falcons in the league opener.

With Blick back from Qatar mid-season, ironically Marines started faltering (maybe because they banked on him so much) and ended up losing four games in the regular season but still squeezed through to the last four.

In the best of three semis though, the task looked more daunting than the qualification. This was because Marines had to face Falcons, a team that tested defeat only twice in the regular season hence qualifying as number one.
Falcons looked unstoppable but not to Marines. Game one of the series at YMCA was fiercely contested and marred by awful refereeing. Falcons won 62-60. The next two games at Lugogo, a venue Marines refer to as ‘slaughter house’ are forgettable for Falcons-they lost the series 1-2. Falcons’ below par display may be blamed on the team’s over reliance on Henry Malinga who was struggling with a knee injury.

Resurrection
The biggest resurrection however came against Power in game four of the final series. Power led 33-19 after five minutes of second quarter but Marines took the day and this was without Blick who fouled out early in the fourth quarter.

With Boniface Okello, Carrol Bisereko, Paul Mwaka, Salim Ali, Donald Blick and Karl Mugalu, Marines heavily relied on teamwork to reatain the trophy.
Without Wilbrod Oketcho Sadolin Power banked on teamwork that almost saw them eclipse Marines in game four of the series. But had Power thought about victory without Oketcho and Ken Balyesusa, may be we would have seen a different champ.
Like Marines, ladies champions Lady Bucks came from behind to beat KCC Leopards in three games of the finals. Most remarkable was game four in which Leopards had a 15-7 first quarter advantage but lost the game 44-59.

Biggest collapse
No team looked more poised to win the ladies championship than KCC Leopards. They won all their games in the regular season but only God knows how they crumbled.

Marines and UCU stole the show in 2006 but should focus be more on teamwork, 2007 is likely to be a great season.

Comments:
Good day, sun shines!
There have been times of troubles when I didn't know about opportunities of getting high yields on investments. I was a dump and downright stupid person.
I have never imagined that there weren't any need in big starting capital.
Now, I feel good, I begin take up real income.
It gets down to choose a correct companion who utilizes your money in a right way - that is incorporate it in real deals, parts and divides the income with me.

Generic Viagra (sildenafil citrate; brand names include: Aphrodil / Edegra / Erasmo / Penegra / Revatio / Supra / Zwagra) is an effective treatment for erectile dysfunction regardless of the cause or duration of the problem or the age of the patient.
Sildenafil Citrate is the active ingredient used to treat erectile dysfunction (impotence) in men. It can help men who have erectile dysfunction get and sustain an erection when they are sexually excited.
Generic Viagra is manufactured in accordance with World Health Organization standards and guidelines (WHO-GMP). Also you can find on our sites.
Generic [url=http://viagra.deutafilm.ru]buy generic viagra online in canada[/url] is made with thorough reverse engineering for the sildenafil citrate molecule - a totally different process of making sildenafil and its reaction. That is why it takes effect in 15 minutes compared to other drugs which take 30-40 minutes to take effect.
[b]Viagra Generico On Line
do porn stars take viagra
Interactions With Viagra
Levitra Cialis Viagra Compare
subaction showcomments viagra start from older
pumkin pie vs viagra
Diabetes Viagra
[/b]
Even in the most sexually liberated and self-satisfied of nations, many people still yearn to burn more, to feel ready for bedding no matter what the clock says and to desire their partner of 23 years as much as they did when their love was brand new.
The market is saturated with books on how to revive a flagging libido or spice up monotonous sex, and sex therapists say “lack of desire” is one of the most common complaints they hear from patients, particularly women.


Look into my web page :: homepage