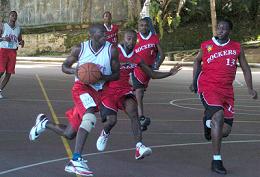 COACH Guy Hall has achieved part of his primary objective with Premium Cobras – overcoming dark horse side Baya to reach the final of the Seychelles Basketball Federation (SBF) Cup.

It remains to be seen if he can go all the way to win his first title as head coach of Premium Cobras who are in a repeat of last year’s final against defending champions PLS Hawks.The country’s top two men’s teams swept their semifinal series on Sunday at Victoria Gymnasium in front of a big crowd. While PLS Hawks’ semifinal looked easier on paper and which reflected in the 86-54 score, Premium Cobras had to break down a tenacious Baya before grinding a 78-71 victory.

The successor of Jude Talma who guided Premium Cobras to reclaiming the Men’s division 1A League title before stepping down, coach Hall told Sports Nation that “we are aiming to sweep Baya and reach the final in just two games” after winning game one 77-63 last Friday.

His team did it but it was not after having had to endure a lot of pressure and him gesturing on the sidelines on each plays and basket scored.

With the two teams unable to distance themselves from each other, the first quarter ended 20-20, but Premium Cobras won the second and the fourth 24-19 and 18-15. Baya, who lost the match on the free-throw line as they misfired after Premium Cobras’ big men Lenny ‘Bad’ Aglaé and Nigerian Reuben Kolawole fouled out with under four minutes remaining on the clock and the score tied at 68-68, edged their opponents 17-16 in the third 10-minute spell. But it was too little too late for coach Michel Malbrook’s team as they came up short in search of a win to tie the series and force a decisive game three.

Winners of the Men’s division 1A Top-of-the-table tournament, Baya were led in scoring by Bernard Cherry with 21 points, including two treys, while Giovanni Laval (16 points, including two 3-pointers) and Robert Léon (12 points) were the other two players in double digits.Premium Cobras’ sharp shooter Danny Bertin, who played alongside coach Hall for Beau Vallon Heat, got off the bench to net a team-high 19 points, 12 of which came from beyond 3-point range. He was helped in offence by Tanzanian Abdallah ‘Dulla’ Ramadhan with 15 points and Aglaé added 14.

Like Hall, PLS Hawks’ coach Tony Juliette also predicted a sweep after their 74-52 game one win and his team delivered once again as they dominated MBU Rockers 86-54.

Without a trophy this far in the season, PLS Hawks are aware that they cannot repeat last year’s League and Cup double feat after losing the 2006 League championship title to Premium Cobras and the SBF Cup presents them with the last chance to rescue their season.

And it looks like they have the ammunition to trouble Premium Cobras in the best-of-three final series starting Saturday December 2 at the Palais des Sports.

PLS Hawks toyed with MBU Rockers on Sunday, winning all four quarters – 24-17, 17-15, 23-16 and 22-6 – and they were led in scoring by go-to-guy Stephen Omony with a game-leading 33 points. The Ugandan all-rounder also connected on three treys.

Nigel Annette (13 points, including two 3-pointers) and Wellington Adeline (13 points) joined Omony as the only hawks in double digits.

Skilful playmaker and captain Nigel Sinon had a high-scoring match for MBU Rockers with 26 points, including three treys. But being the only rocker scoring in double figures, it was always going to be tough for his team to trouble the experienced and tough-to-beat PLS Hawks.

Unlike the men’s final which will be a repeat of the 2005 edition, the 2006 women’s finalists are different compared to last year. 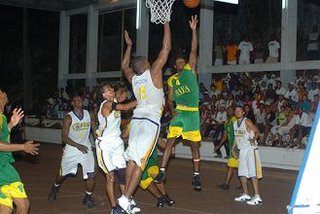 Chasing their first ever SBF Cup, HotShots defeated defending champions Anse Etoile Stars 52-41 in their first match to kill off coach Malbrook’s team’s dream of a League and Cup double, before sweeping Cadettes 2-0 (50-41 and 70-35) in the best-of-three semifinals.

In the other best-of-three semifinal series, Mont Fleuri twice held on to win 63-62 and 50-47 against last year’s losing finalists Bel Air for a third final appearance this year.

After losing their first two finals to Stars – 45-51 in the Curtain-raiser and 34-85 in the Top-of-the-table tournaments – Mont Fleuri hope to win their first title this season and a second SBF Cup after the first achieved in 2000.

Thanks for sharing the information