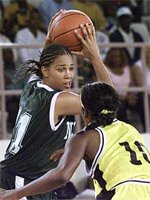 Is Nigeria about to repeat the mistake of cutting Olumide Oyedeji from the national men’s team to Japan 2006 with the female national team?

Nigeria coach Kevin Cook cut MacTabene Amachree from the Lady Tigers’ final roster at the weekend as the team launched its final preparations for the Brazil 2006 FIBA Women’s World Championship tipping off in Sao Paolo on Sept 12.

According to Isah Umar, the camp coordinator of the Lady Tigers, Amachree was cut from the team because she reported late for the camping exercise.

“The coach has a good team that will do the country proud,” Umar told The Hoops on Thursday from the United States. “These are a good crop of players.

“The coach is aware that his reputation is on the line and so he wants to win; he will win with these players.”

Also missing are forward Rashidat Sadiq, who has been on the national roster since 2003 and was present in the Melbourne Games, and the captain of the team in Australia, Mercy Okorie.

As expected, swingman Mfon Udoka, the elder sister of Ime, the Tigers’ swingman, leads the 12-man roster. Udoka has been exceptional since her debut for Nigeria in the 2003 All Africa Games in Abuja and led the team to its first Nations Cup triumph at home in Abuja last December over Senegal.

The Turkey-based Udoka is joined by Itoro Umoh, who made her Nigeria debut in Athens 2004 but has been unavailable since then and Akiode Mobolaji, the shooting guard who also came into international attention in 2003 with Nigeria and First Bank.

Two others – centre Ugo Oha and power forward Aisha Mohammed – are the only other players who have been on duty for Nigeria before.

Olanrewaju is a 6ft 3in centre with Xavier, while Ogunoye, a senior at UT-Arlington in the U.S. last year, is a 6ft guard who has garnered several honours in American schools.

Sanni is a centre with the West Virginia University, while Nwagbo made her mark with Orange Syracuse.

Izidor, a Stamford University graduate, has played in Greece and Turkey (with Amachree and Udoka) and is guard-forward.

With the release of the female national team final roster for the battle it means the home-based players who did the nation proud by qualifying this team for the world championship have been left out once again just as coach Sam Vincent did in 2004 when he turn his eyes the other way from the largely home-based players who qualifies Nigeria for the 2004 Athens Olympic Games then.

This is a sad development and does not speak well of these coaces being hired by the NBBF to tinker our teams, its shows they are just out to boost their curriculum vitae borne out of selfish desire rather than helping to take the game to the next level in Nigeria.

Where is the place of Funmi Ojelabi, Amaka Adibeli, Patricia Chukwuma, Ezinne James, Nguveren Iyorhe and Chioma Udeaja or coaches Scott Nnaji and his assistant Adewumi Aderemi yet when it is time to qualify our national teams for world championship or the Olympics they are made to carry out the task and later dumbed.

Coach Cook or who ever is incharge of our present female national team should be told that some crop of players and coaches laboured to qualify these team for the FIBA world championship which he is now reaping and should ask questions why those players and coaches are not in the present scheme of things except he want us to beleive that he is another Sam Vincent, asked a bitter basketball enthusiast.

I hope the same thing will not happen come 2007 when our victorious junior team will be preparing for Canada after beating the rest of Africa to pick one of the two tickets for the FIBA U-19 World Championship, the pundit who does not want his name in print concluded

Thanks for sharing the information

thank you very useful information admin, and pardon me permission to share articles here may help :

given article is very helpful and very useful for my admin, and pardon me permission to share articles here hopefully helped :

may be useful for all, helpful article once and pardon me permission to share also here :

Nice, have the motivation for everything

I think this is an informative post and it is very useful and knowledgeable. therefore, I would like to thank you for the efforts you have made in writing this article.
obat ginjal bengkak
obat kaligata
obat benjolan di tangan

I need this article to complete my assignment in the college, and it has same topic with your article. Thanks, great share pengobatan mata pterigium

Thank you for sharing the information

It was really a great information thanks for sharing.